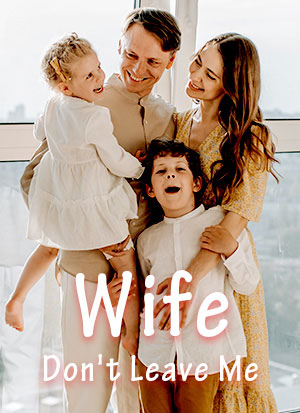 Chapter 1 I Think We Should Call It Quits Between Us

Nicole Bush was surprised when she saw the result of the pregnancy test. She had actually gotten pregnant! And it was Samuel Green's child! After three years of marriage, she was finally pregnant with his child, and it was truly an uneasy feat to her. She walked out happily with the result and was so eager to tell Samuel the good news. Yet as she went around a corner, a familiar shadow loomed before her.
It was Riley George, Samuel's first love. And she had actually come back! Nicole quickly followed her, yet she noticed Samuel who was supposed to be at the workplace was actually staying by her side, and he was holding her carefully. Her tummy was so big that she was obviously pregnant for five months.
"Samuel, I'm alright. You don't have to worry. The baby's okay."
"I still need to let you have a checkup to gain a peace of mind. After all, the baby in your womb is the eldest grandson of our family, and we could not tolerate any single blunder." Riley let out a big smile while Samuel treated her with care. That scene had deeply hurt Nicole.
"What are you doing?" Nicole grasped the pregnancy test result in her hand tightly and her fingernails pierced into her palm through the paper. Yet the pain was way incomparable to the pain her heart felt. She had some congenital problems with her womb. In order to give birth to a child for Samuel, she had taken various medications these three years and visited various hospitals. She even nearly lost her life for a few times. Yet she had never imagined that she would witness Riley getting pregnant of Samuel's child at the exact same day she knew herself getting pregnant.
"Why are you here?" Samuel wrinkled his eyebrows. The gentleness in his eyes just now vanished and his eyes turned cold and apathetic. Even the temperature of the surrounding seemed to drop. Seeing the contrast of his attitude then and now, Nicole could not bear with it anymore and she came forward to question him, "Why am I here? I'm your wife. Now that you're accompanying the other woman for a pregnancy checkup, you dare ask me why am I here?" Her questions attracted attentions of the bystanders.
Riley suddenly burst into tears feeling guilty. "Sam, I'm sorry, I've dragged you into this mess. If I've not returned and told you about the child's existence, or I'm determined enough to abort the child, maybe you'll not be misunderstood by Nicole. I'm sorry, it's all my fault." The moment she finished her words, she turned around and ran away.
"Jacob, follow her, and look out for her tummy. If there's anything happening to the baby, I'll make you responsible for it." There was a slight panic in Samuel's voice and his assistant, Jacob Brown quickly chased after her. Nicole felt difficult to breathe as Samuel had never given her such a care. "Samuel Green, you bastard!" She raised her hand, wanting to give him a slap, but was stopped by him. She frowned due to the pain when Samuel slightly exerted force on his grasp towards her wrist.
"Nicole Bush, when you used trick to get onto my bed three years ago and forced me to marry you, you should have known that it's impossible for me to give you the love you want from this marriage. I warn you. The baby in Riley's womb is very precious, and it's also the flesh and blood of the Green family. If you dare do anything obnoxious to her, don't blame me for not caring our husband-and-wife relationship." As he finished, he tossed down her hand.
Nicole lost her balance and nearly fell down. She quickly supported herself with the wall beside her and the paper escaped from her grip. It flew and dropped before Samuel. "You're pregnant?" A startled look flashed across his face, yet Nicole started to smile, and tears flowed down from her eyes. "Could you possibly care about it? I've explained to you three years ago, but you refused to listen. No matter how I much I cared about you, you always ignored me. Now that your first love wants to give birth to your child, Samuel Green, I do love you, but I have my own self-esteem and pride! I'll get rid of the child and I think it's time to call it quits between us."
Her heart was torn out but she was steadfast enough to turn around and leave. Samuel pulled a long face and strode forward, carried her up and walked straight towards the hospital's exit with quick steps. "Nicole Bush, who do you think you are? It's you who forced me to marry you, and it's also you who insist to abort the child now. Do you really think that I won't get angry and could let you fool me as you want? Let me tell you, I decide the child's fate!"
"Let go of me! Samuel! This is my child in the first place, and it's none of your business!" Nicole struggled hard in rage, yet she could not overcome Samuel's suppression. "Your child? Without me, do you think you could get pregnant? Nicole Bush, you'd better not irritate me at this point of time!" Samuel narrowed his eyes and was surrounded by an oppressive aura at once.
Just then, his phone rang. To pick up the call, he put Nicole down but restricted her movement with one arm. His action was full of domineering intention and Nicole could not help but feel a little sad. Sometimes she would have a delusion that Samuel actually cared for her more or less, just like what happened now.
"What did you say? Riley wants to kill herself? Keep an eye on her, I'll be right there!" Samuel suddenly panicked and the warmth Nicole felt just now gradually drained away.